Cockroaches (order dictyoptera) are found worldwide and in a wide range of environments. The cockroach species found in Ireland are the Oriental Cockroach, German Cockroach and American Cockroach. With the high risk of disease pest control measures should be taken quickly when evidence of a cockroach infestation is present. 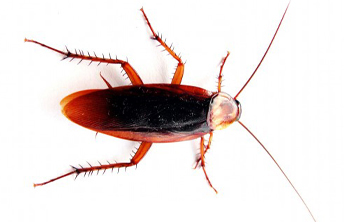 The Oriental Cockroach (Blatta orientalis) can carry disease so is regarded as a serious pest. They are found in heated buildings, underground heating ducts, drains and rubbish dumps. Oriental Cockroaches may survive winter outside in protected environments but they will not breed if the temperature goes below 10°C, they do not like extremely hot and dry conditions.

The Oriental Cockroach is found worldwide and is common throughout Ireland inhabiting heated buildings, however it can also be found outdoors in certain environments. It is often associated with restaurants, hotels, old tenements and institutions such as hospitals and prisons. Oriental Cockroaches are nocturnal but some daytime activity may occur in large infestations.

Oriental Cockroach control can be difficult due to the emergence of nymphs from aged eggcases (oothecae). Repeat treatments must be made to ensure enough insecticide is present to control any emerging nymphs for three months. Outside areas such as drains, dustbins or waste food areas should also be surveyed when carrying out treatment, Oriental Cockroaches have been detected up to 80 yards from buildings. 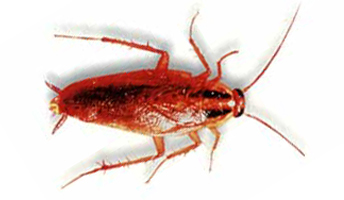 The German Cockroach (Blattella germanica) is nocturnal and in Ireland is found indoors in heated buildings. It can carry disease organisms and if no control measures are carried out can rapidly spread.

German Cockroaches are not very tolerant of cold, so in Ireland are only found near human habitats. Because of its liking for the conditions found in the galleys of ships it is also known as the Steamfly.

Controlling the German Cockroach can prove difficult because of the prompt emergence, and large number of nymphs from each egg case. It is also smaller than other cockroach species making it easier to hide. 95% of the overall population in a property must be killed for any pest control treatment to be effective because of the fast reproductive cycle. The use of baits with residual sprays and dusts will control most infestations, particularly if placed in deep voids and crevices.