There are over 10,000 species of flies (Order Diptera) worldwide. They are seen by humans as dirty insects that can contaminate food and carry disease, and is true for many of the species that live in close association with humans. 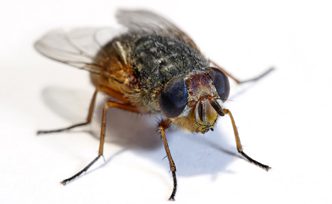 The Common House Fly (Musca domestica) can transmit disease and contaminate food and are often found in association with humans either indoors or around human outdoor activity.

The house Fly is found worldwide and can be found wherever suitable breeding conditions exist, usually in rotting, fermenting vegetable matter preferably with a high protein content or in animal faeces. Adult flies are highly mobile and are capable of traveling several miles.

House flies spread disease, parasitic intestinal worms and are linked to the spread of typhoid and cholera. They make unwelcome visitors in private dwellings and businesses and in certain environments such as intensive animal housing units and rubbish tips there numbers can become very vast making life very difficult for livestock and staff.

There are many physical steps that can be taken such as covering bins and rubbish tips, cleaning drains and gullies in and around kitchens to remove organic material and installing fly screens on the windows and doors of food premises. Electronic fly killers (EFKs) and sticky fly papers can also be used where the infestation level is not large. 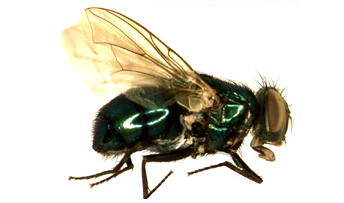 Species of the family Calliphoridae, Bluebottles and greenbottles are found all over the world. The adults are active fliers and are capable of traveling several miles. They are very common in the wild and are also associated with human activity. They mainly breed on decaying animal matter.

There are many physical steps that can be taken such as installing fly screens on the windows and doors of food premises, covering up any meat products to prevent egg laying and any animal waste should be removed frequently.

Residual insecticides, aerosols and misting space sprays based on pyrethroids are all effective Bluebottle / Greenbottle pest control measures. Electrical fly killers using UV light can also be used in some situations. It is also important to find the source of the infestation, possibly a dead mammal or bird.